Showing posts from February, 2010
Show all

Literary Neanderthals (and you thought they were stupid!)

One of the online journals I read fairly regularly is MercatorNet , a site that features articles on a variety of subjects, whose common link is attention to the inherent dignity of the human person. The subjects of the articles are taken from news headlines, and one of the aims of MercatorNet's editorial policy is to take on polemically the assumptions embedded in many offerings put out by "objective" journalistic media. Or, as the MercatorNet editorial staff put it, We're proud to have enemies and we attack them repeatedly by confronting them with evidence. Here they are: moral relativism, scientism, crass commercialism, utilitarianism, materialism -- in short, any ism which reduces persons to ciphers and treats them as soulless machines. We delight in dissecting media cliches. They actively invite comments on their articles and encourage discussion among readers who may or may not agree with the views expressed. Since comments are moderated, the resulting
Post a Comment
Keep reading »

Conversion stories in the Christian Tradition 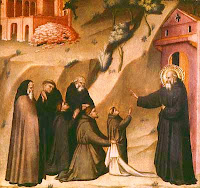 St Benedict restores life to a young monk Various things the last couple of weeks have kept me from much reading or writing. (Okay, I read a few Janet Evanovich novels about a New Jersey woman who becomes a bounty hunter after she loses her job as lingerie buyer at a local department store -- I'm all for career flexibility, but have decided not to follow her example.) This being Lent, I scrounged around for some appropriate reading (not that City of God would not be appropriate!), and found a copy of the second book of St Gregory the Great's Dialogues , which is devoted entirely to the life of Saint Benedict, the father of Western monasticism, and a number of miracles worked through him. This is an edition from Macmillan's Library of Liberal Arts series, translation and introduction by Myra L. Uhlfelder, which I picked up a few months ago from Half Price Books for 98 cents. Hagiography -- i.e., stories of saints working miracles and fighting off temptations an
Post a Comment
Keep reading » 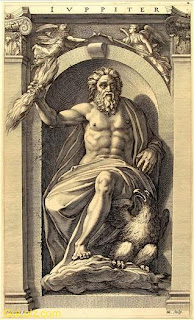 Last week when I was writing my previous post about Michael Ward's Planet Narnia, I visited Ward's website and left a comment on his blog, telling him how much I like his book and inviting him to take a look at what I had said about it on my own blog. A day or two ago I received this reply from him: Dear Lisa, Thanks for your post on the Planet Narnia blog.  I'm delighted to know you enjoyed reading the book; it was certainly the greatest pleasure to write. Thanks also for your post on your own blogsite, which I read and admired.  One thing I would slightly question though is the use of the word 'red herring' with respect to Aslan as Christ.  Sure, it's a red herring insofar as it has led critics to concentrate far too exclusively on Biblical-allegorical readings of the Chronicles.  But Aslan certainly IS a Christ-figure, beautifully so, and the planetary scheme Lewis adopted means that the Christology he is trying to communicate is far more sophis
Post a Comment
Keep reading »

Comment on Gilson' s Foreward to City of God 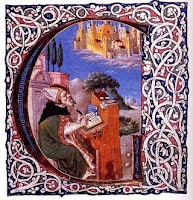 Aside from agreeing with Gilson’s general thesis -- that we wouldn't have the modern notion that we can create a universal and just society, had it not been for Augustine's City of God --  I will simply suggest that his last point is one worth considering. Although I don’t think we are anywhere near creating a just society on earth (according to the secular or the Christian model) – in fact, we often seem to be going in quite the opposite direction! – it seems that in the present day, when the secular world presents itself more and more as being necessarily antagonistic toward the Christian faith than perhaps at any time since Augustine’s own day, it is more important than ever that separated Christian bodies unite with – or at least collaborate with – the Catholic Church, to make common cause toward building a just society consonant with (not striving against) Christian principles. (In fact we see, more and more, that other religions are willing to make common cause with C
2 comments
Keep reading »

Gilson's Foreward to the City of God

What follows is my summary of the abbreviated version of Gilson's introductory essay that appears in the Image edition of the City of God t hat I'm reading. It runs on a bit, so I'll put my commentary in a separate post.   Gilson emphasizes that our modern aspiration to build a perfect, universal society had its origins in Augustine’s description of the City of God and the way this City cooperates with, and shares benefits with, the City of Man. However, the modern world neglects a fact that the ancient world would have found impossible to deny – that every society is held together (i.e., merits the name of “society”) only insofar as it is united by two things: religion and blood kinship. He goes on to say that Augustine, in writing The City of God , demonstrates that the City of God, or the Heavenly Society, also is defined by these two factors – religion, in that it consists only of those who have held God as their highest good, and kinship, in that it comprises those w
Post a Comment
Keep reading »
More posts