Showing posts from September, 2013
Show all

Ruminating on The Father's Tale 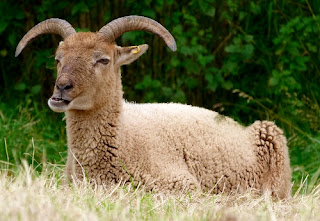 Here I am, ruminating on The Father's Tale In Book Ten of his Confessions , Saint Augustine of Hippo refers to the memory as “the stomach of the mind” – an image that probably seems strange to many modern readers, but one that has been very useful to me. He wasn’t talking about the kind of stomach we humans have – which are a kind of way station for food on its way to the intestinal tract – but the kind of stomachs found in sheep (as well as cattle and goats, etc.), i.e., a ruminant stomach. The ruminant stomach stores food until it can later be brought back up and chewed over (ruminated). I’ve always loved this idea of the memory as somewhere that we store our experiences until we have a chance to bring them back to mind and “chew them over” or ruminate upon them. Animals who literally ruminate (chew food that they have already swallowed) do so in order to get the nutrition out of what they have eaten, and to be able to digest it properly; in a similar way, as Augusti
Post a Comment
Keep reading »
More posts